Parts of the Commonwealth are now considered "Abnormally Dry."

ROANOKE, Va. (WDBJ) - This week’s Drought Monitor confirms what we’ve all been thinking for the past month. It’s getting too dry.

The U.S. Drought Monitor, released July 16th, has now painted parts of northern Virginia as well as as western Virginia in what is considered to be D0 drought (Abnormally Dry). This is the first level of intensity and is a step below moderate drought.

One might imagine other areas in Virginia will be getting very close to the same designation if we don’t receive rain in the coming weeks. The report takes into account rainfall that has fallen up until the Tuesday before the report is released.

“The combination of heat and minimal rainfall was a concern for many agricultural areas as crops are at critical stages of growth and reproduction,” cites the drought report. With high evapotranspiration rates during the summer heat, topsoil moisture can become rapidly depleted and stress the crops.

HOW MUCH RAIN HAS FALLEN?

While June was quite the wet month for any areas, July has been quite the opposite. As of this article, the major climate reporting locations in Roanoke, Lynchburg and Blacksburg are 1-2″ below average for the month in terms of precipitation. In fact, as of July 15th, Roanoke hasn’t seen the first quarter inch of rain for the month. Looking back, no day had more than .15″ of rain since a storm dumped slightly more than an inch on June 19.

Danville has received slightly more rainfall with several downpours so it’s not necessarily considered “dry.” However, the bulk of the region has been dry since the middle of June.

Monthly rainfall graphic (below) is issued daily around 5:30 P.M. when the official climate data for the day is released). 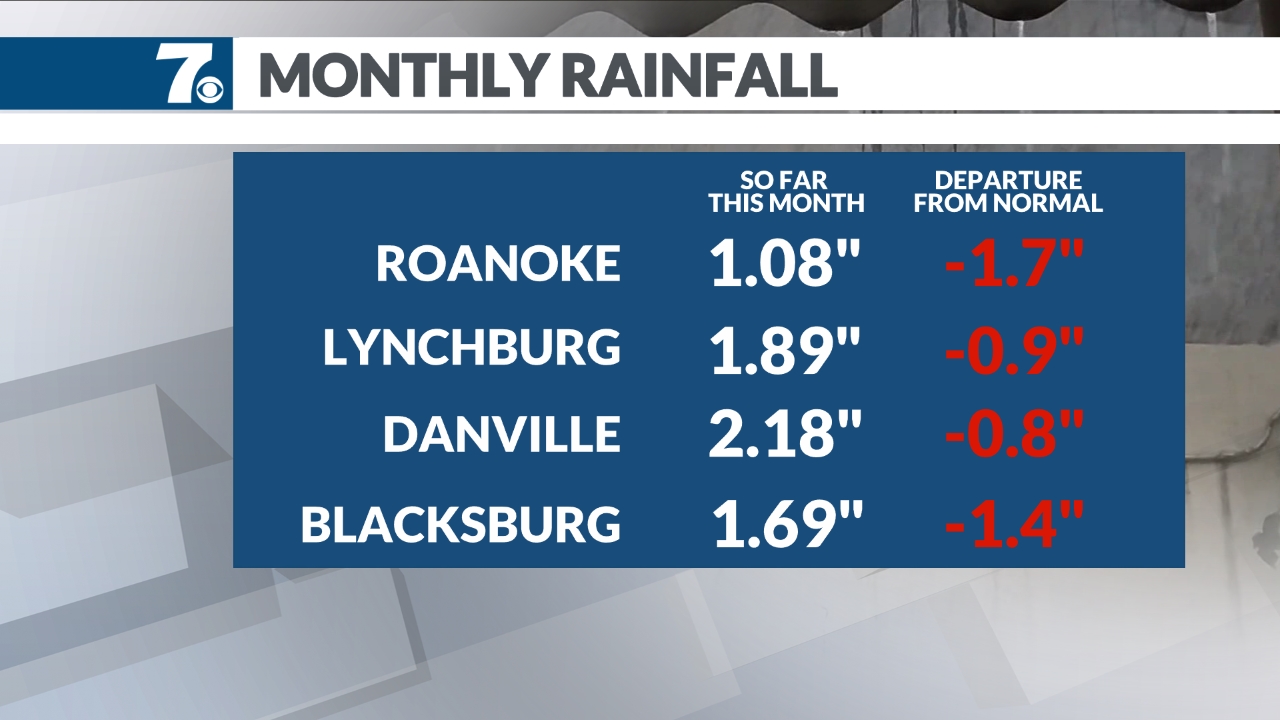 When it gets excessively hot and dry, your lawn’s and plant growth begin to slow, and in some cases, die out. Virginia Tech Cooperative Extension office offers a lawn offer a few tips in their article and podcast.

No signs of a major pattern shift around in the immediate forecast. The heat and continue to be the big story with scattered to isolated storm chances. One could only hope for some rain from the tropics, but often that can take us on the other side too quickly.

Get your 10-Day Forecast

Suspect on the loose in Craig Co.