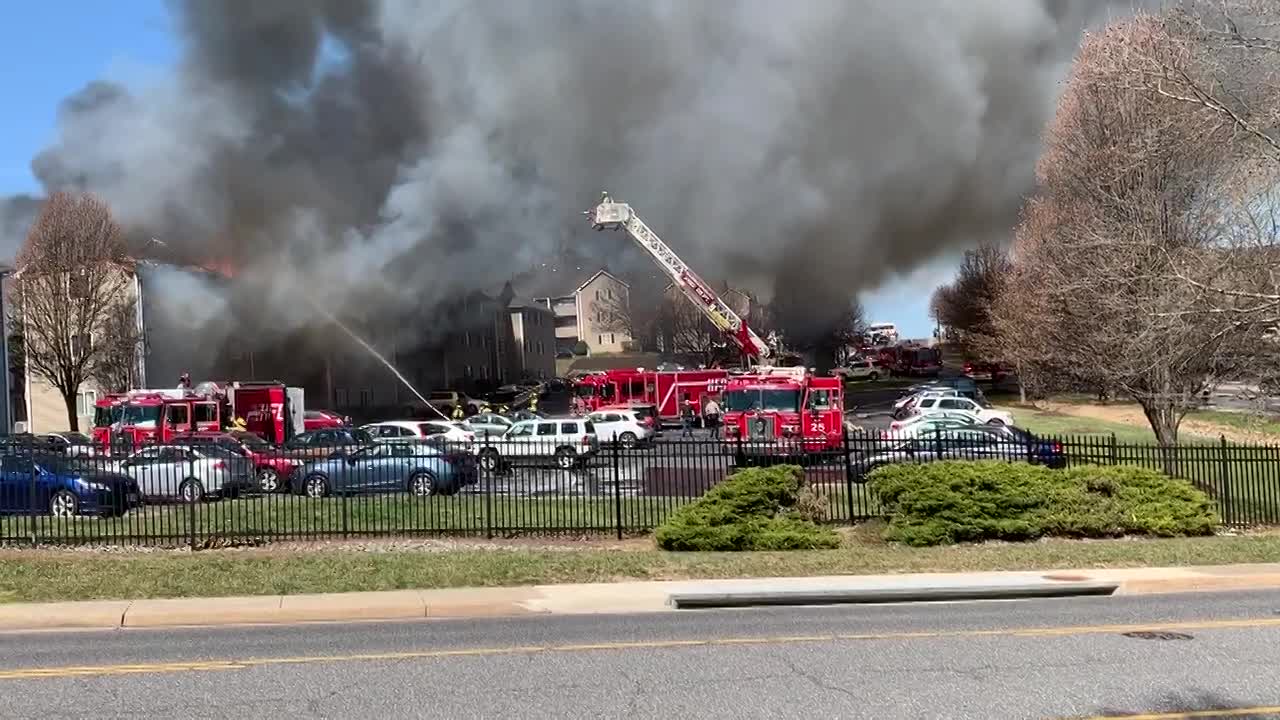 Video of fire submitted to WHSV by Mike Wampole 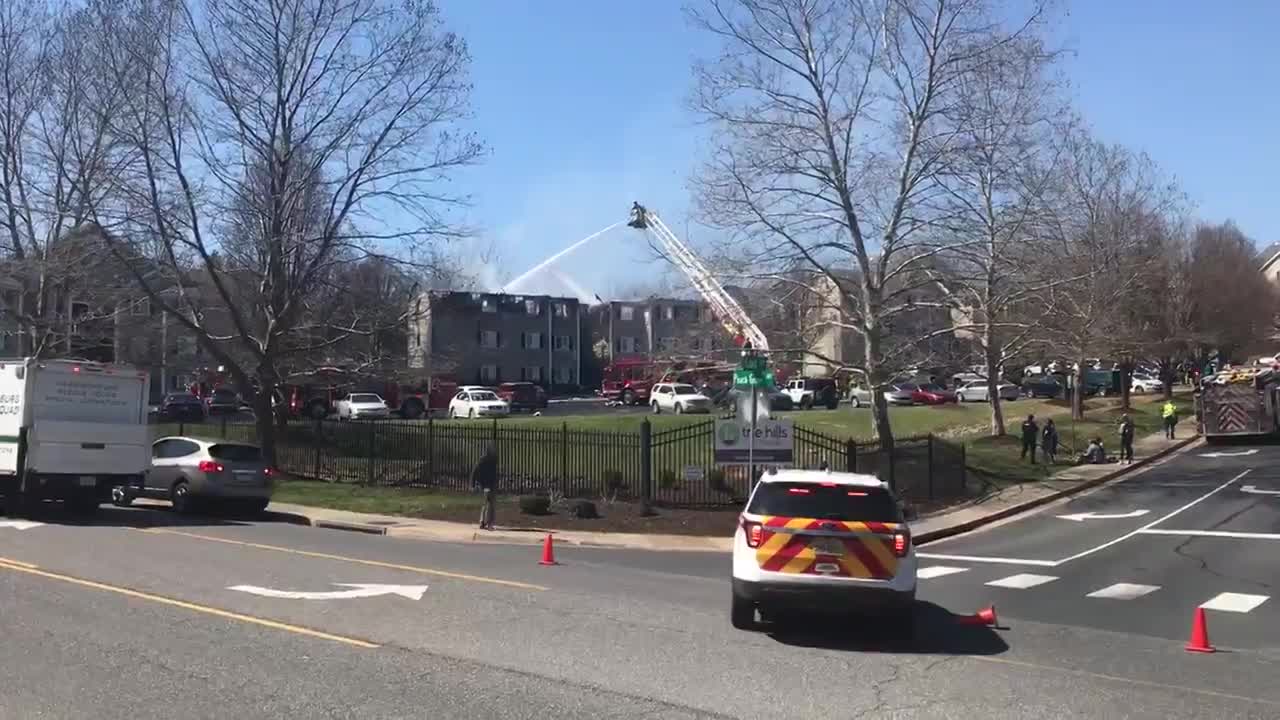 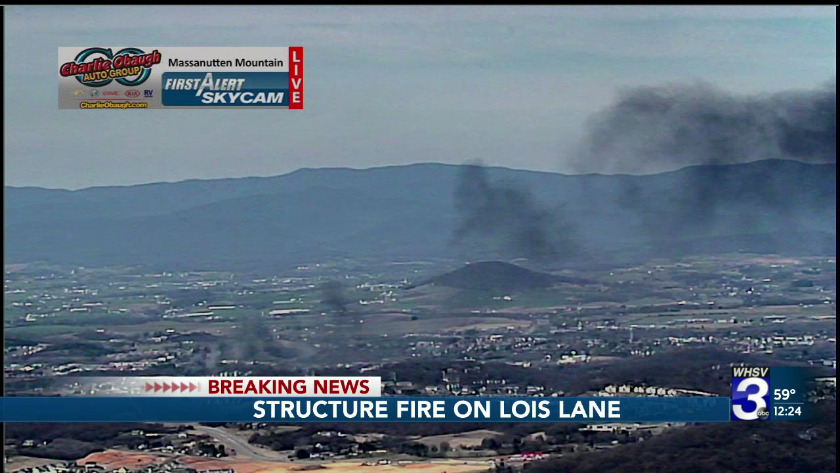 Crews responding to 3-alarm fire in Southview Apartments in Harrisonburg

HARRISONBURG, Va. (WHSV) — The Harrisonburg Fire Department says everyone was safely evacuated from a massive fire in the Southview apartments on Thursday afternoon and it has been contained, but a large-scale emergency response involving crews from up and down the Shenandoah Valley continues.

According to police, all tenants have been accounted for and are safe. The fire department issued a tweet at 1:44 p.m. confirming that the fire has been contained.

Emergency responders are still urging people to avoid the 1000 block of Lois Lane on Thursday afternoon as response continues.

James Madison University reports that all students in apartment 1083 have been accounted for, but they're asking any students who live in apartments 1073, 1083, and 1093 of Lois Lane to check in with property management at the clubhouse, where counselors are on hand.

With the apartments used largely for student housing, James Madison University sent out an alert to students at 12:38 p.m. warning them to avoid the area of the fire.

The university has not clarified exactly how many students were displaced by the fire.

According to the Harrisonburg Fire Department, crews were dispatched at 12:06 p.m. for a report of a structure fire in the 1000 block of Lois Lane. A caller said fire was showing from an apartment there.

While some crews were tied up at a gas leak on the north end of the city, one engine arrived in just about three minutes.

When those firefighters got there, they found that fire from a ground floor apartment had spread to the attic and flames were shooting out of the roof.

The status of the fire was quickly escalated to a five-alarm.

Smoke could be seen from as far away as Cross Keys and from WHSV's skycam on Massanutten mountain as crews rushed to the scene.

A call went out for any off-duty personnel available to report and, in addition to Rockingham County and Harrisonburg crews, Augusta County firefighters headed north and Shenandoah County crews headed south to assist.

People from surrounding buildings were evacuated for safety.

WHSV's Air3 drone showed the tops of two buildings appeared to be completely gone by 1:30 p.m.

The department has not yet determined a cause of the fire.

There were smoke detectors and sprinklers, but the fire ran up the outside of the building, so sprinklers had no effect.

According to Chief Ian Bennett with the Harrisonburg Fire Department, the wind was not too bad when crews arrived, clocking in at about 8 mph. It may have been a partial factor in it spreading to the next building over.

Throughout the rest of the day, crews will have to tear off siding of the building and eliminate any hot spots they find.

“We appreciate the rapid response not only by city units but additional units from the surrounding area, which helped us to contain the fire primarily to one building,” said Chief Bennett. “It was a very aggressive attack by all units."

Buildings to either side of the fire sustained superficial damage, but no damage to their interiors.

Pets affected by the fire?

According to multiple sources at the scene, a student said they were not home at the time of the fire and had a dog inside, but the Harrisonburg Fire Department could not confirm that they had encountered any pets at the scene.

Staff with Anicira Veterinary Center arrived to the scene alongside emergency responders and let police know they're available to help any pets in need, but they told WHSV they haven't received any for treatment.

The effect on city transportation

For those who rely on the Harrisonburg Department of Public Transportation buses, service at the Southview Apartments has been suspended, and riders will need to get to stops along Port Republic Rd. at Northview, Deer Run, or Liberty Station.

Due to the fire, police have closed Peachgrove Rd. from King Edwards Way south to Neff Avenue and Lois Lane from Peachgrove Rd. to the point where Lois Lane turns into Devon Lane off of Port Republic Rd.

What now for people displaced by the fire?

Red Cross Virginia says that their team is working to determine how they can best support anyone displaced by the multi-unit apartment fire.

Everyone who lives in apartments 1073, 1083, and 1093 is asked to contact the clubhouse as soon as possible to speak with property management and with counselors there.

Rocktown Realty, a Harrisonburg realty company, tells WHSV that they are heartbroken over the fire and want to help in any way possible. According to a press release, they have rooms available in Camden Townes on Port Republic R., one available in Pheasant Rd., and one in Campus View for any students displaced by the Southview fire.

They'll also be setting up a donation box in their leasing office to welcome kitchen appliances, clothing, curtains, etc.

In addition, a GoFundMe was set up by Courtney Brogna to raise money for the students who lost their apartments and their belongings, calling for people to "help out your fellow Dukes in need." In just an hour, over $15,000 was raised by 992 people.

A donation box has also been set up in the 865 East lobby at 865 Port Republic Road.

James Madison University is working with the school's bookstore to establish a computer loan program for students affected by the fire and with their business department on short-term cash loans for students if needed. The school is also developing plans to provide on-campus housing for any students in need of it.

@HarrisonburgPD ask if anyone lives in apartments 1093, 1083 or 1073 to check in with the leasing office. #TheHillsSouthview #fire @WHSVnews pic.twitter.com/ixXxetRqPf

Video of Harrisonburg fire. Intersection of Lois Ln and Peach Grove Ave. @WHSVnews drone "AIR3" is busy capturing striking images of scene. We'll get those out asap. Follow our team @WHSVnews @WHSV_Autumn @WHSVNinaBaratti @WHSV_Mackenzie and @HFDVA for the latest. pic.twitter.com/IiGV0uBzPG

Some drone shots from Air 3 of the fire on Lois Lane. Still waiting to hear if there are any injuries. pic.twitter.com/Aq2o94uR0Z

Praying no one injured - tenants or responders. Important these building are as safe as possible.

Last of its kind, fishery faces reckoning in Chesapeake Bay

Historic nuke plant in Virginia to be fully dismantled

Gun-rights activists gear up for show of force in Virginia

Last of its kind, fishery faces reckoning in Chesapeake Bay

Historic nuke plant in Virginia to be fully dismantled

Gun-rights activists gear up for show of force in Virginia