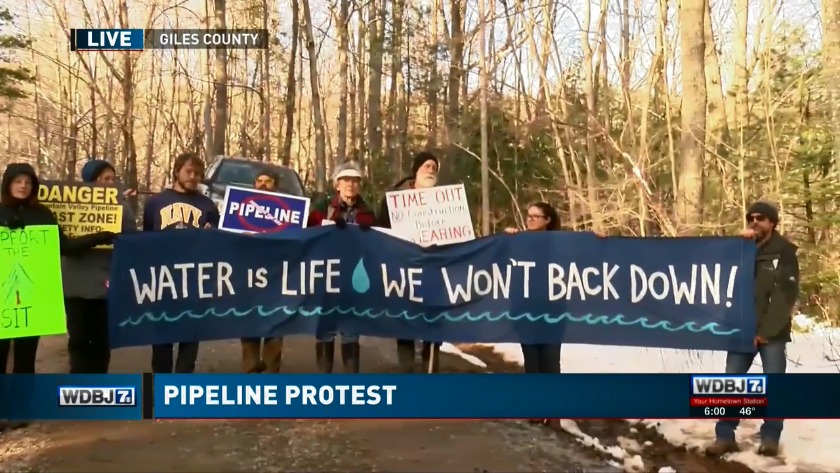 GILES CO., Va. (WDBJ7) Law enforcement officers from the U.S. Forest Service traveled to the top of Peters Mountain Thursday, where tree sitters were camping in the path of the Mountain Valley Pipeline.

The officers posted additional notices closing the area, but they did not attempt to remove the activists Thursday afternoon.

One tree sitter posted on Facebook Live as the officers arrived near the tree she was in saying, “Something else getting taped to a tree.”

The note taped to the gate by the same officers read no one is allowed within 200 feet in either direction of the center line of the pipeline's path, which would include the tree sitters. But it’s not known yet whether this means any law enforcement can remove them yet without a court order.

The officers used a forest service road in Giles County to access the Appalachian Trail. While they were on the mountain, pipeline opponents gathered nearby to support the tree sitters.

Becky Crabtree, a West Virginia Property Owner who would be impacted by the pipeline said, “The involvement of the Forest Service, armed law enforcement personnel, ratchets it up a notch and I wanted to be here if I was needed.”

The day also brought a confrontation between a Giles County landowner and a crew cutting trees for the Mountain Valley Pipeline.

The land at the heart of that dispute is located between Pembroke and the Cascade waterfall, the point at which plans call for the Mountain Valley Pipeline to cross Little Stony Creek.

The landowner said he didn't fight the tree cutting on other parts of his property, but said he was expecting MVP to tunnel beneath the creek and not disturb trees above.

"If I went in there and cut I would be breaking DEQ law," Shawn Hash said of the wetlands near his home, "but for some reason they have a blanket permit from the Army Corps which allows them to do it. And that's really the frustrating part. We have really felt that we have not had an advocate at any level to help us in this. We've been kind of on our own."

He went onto say, “After all the lawyers got involved, even with the boring they have to cut the trees. So at that point we had to let them cut our trees but that was misinformed to us.”

Hash said his primary concern is what's best for the creek, and he hopes the Virginia Department of Environmental Quality and the U.S. Army Corps of Engineers will take another look.

"Tree cutting activity on behalf of Mountain Valley Pipeline is occurring within the project’s approved and permitted construction right-of-way.

Little Stony Creek was permitted by both the VA DEQ and the Virginia Marine Resource Commission as an open cut, dry ditch crossing.

Based on a recommendation by the FERC, as issued in the FEIS for MVP, the Pigg River would be the only waterbody that the project would cross using horizontal directional drilling (HDD)."