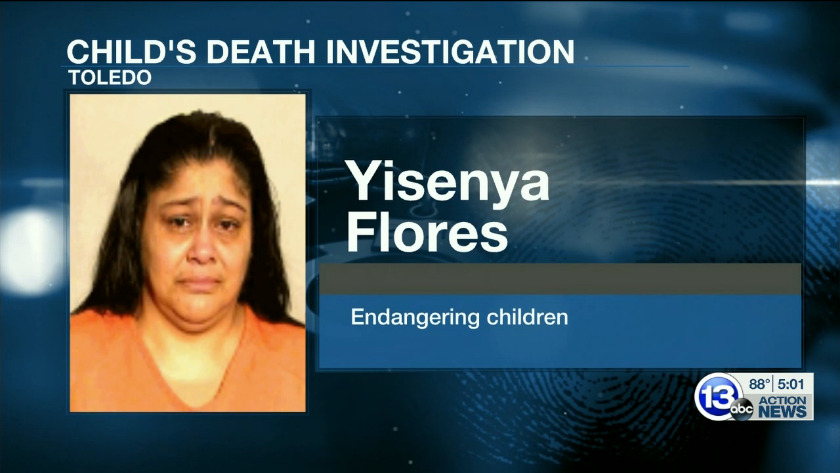 Grandmother accused in death of child

TOLEDO (WTVG/Gray News) - A woman has been arrested after she admitted to striking a 5-year-old child and not calling 911 until the following day, WTVG reported. The child later died.

According to court documents, his grandmother, Yisenya Flores, was charged with child endangerment in the Thursday incident. She appeared in court on Friday and was held on $500,000 bond. She is expected to face a judge for the murder charge on Monday morning.

On Thursday, Toledo Fire responded to a call of an unconscious baby that had fallen off a bed. The grandmother claimed the boy jumped from a box spring or mattress laying on its side onto a carpeted floor and hurt himself. Medics administered life-saving measures and took the 5-year-old child to Toledo Hospital, where he later died.

According to court documents, staff members at the hospital informed investigators that the injuries were not consistent with a fall from a bed.

Police interviewed Flores, who admitted to striking the child on Wednesday night. Court documents stated that Flores said she noticed the child was lethargic and semi-unresponsive but did not call 911 until after 6:30 p.m. the following evening.

The coroner said there is evidence the child suffered from battered child syndrome, which means the child had older healing injuries and abuse was ongoing.

Read the original version of this article at 13abc.com.

Confederate monuments coming down around South amid protests

COVID-19 Tracker: Check out the latest coronavirus test results around the country

Confederate monuments coming down around South amid protests

COVID-19 Tracker: Check out the latest coronavirus test results around the country