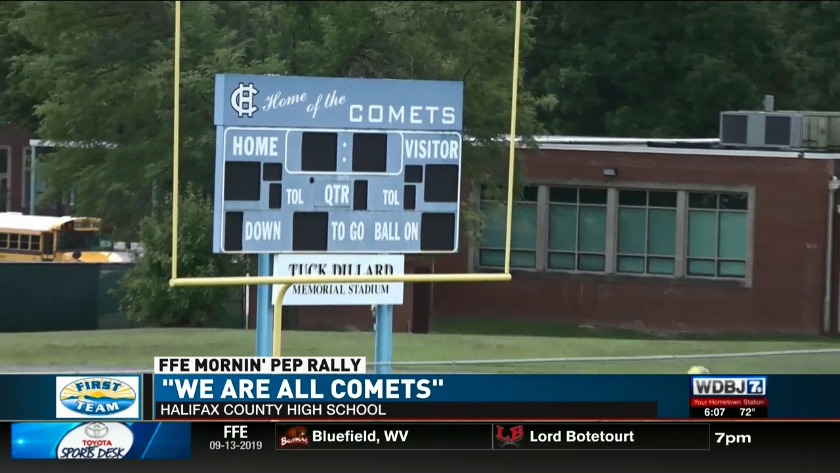 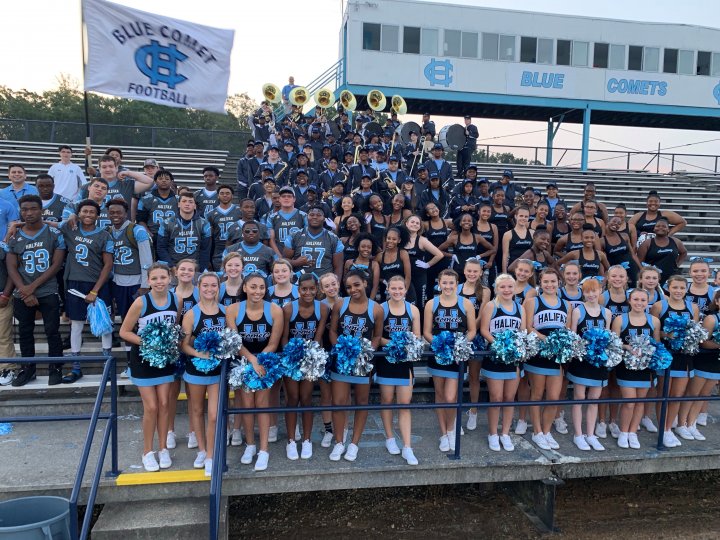 It was the biggest turn out of students, football players, cheerleaders, band and auxiliary members. The took up over half of the newly renovated bleachers, a project that many of them worked on personally over the summer.

Now in Halifax County, there's only one high school.

"We are all Comets. Comet Strong," Mike Lewis, the school's principal, said. "So it means contributing as a team member, being a part of a great team, and accomplishing an goal we set out to do."

Over summer, that goal was to spruce up the football field.

"What you see is basically the same that was here in 1969," the athletic director, Allen Lawter said.

One day they hope to build a new football stadium, but for now they want to take care of what they have.

"We decided to do some painting and replacing what we could and that type of thing to show a little pride in the kids we have now," Lawter explained.

And it was the kids who actually put a lot of elbow grease into the projects.

"First day, the cheerleaders sanded down the railings. Then the football players painted it," Anni Knouse, a senior cheerleader, said.

Then the cheerleaders marked their spot on the concrete with a giant blue "COMETS." Volunteers also painted the concession stand and renovated the broadcast booth.

"The cheerleaders are here every weekend and we cheer here and we wanted to have an environment where people want to be here and want to come watch the game," Knouse said.

The football team's head coach, Grayson Throckmorton said the work everyone did together over the summer is symbolic of the teamwork it takes in the game of football.

"Football is an overall team sport," he said. "It's the ultimate team sport.

It was a team effort getting the upgrades done. Because here, everyone's a Comet.

"Comets help other comets and we help our community and we work together to provide for each other," Principal Lewis said.

Blue Comets are not only proud of their athletics but also their academics. Last year, the school started a new class on leadership that was so popular, they brought it back this year.

The classroom where leadership takes place isn't your typical classroom.

"This is life-learning," the class instructor, Coach Melanie Saunders said.

Here, students gather in groups,.sitting in seats that they got to pick out themselves last year.

"When these kids can get comfortable in a setting, it's amazing what difference it really does make," Saunders said.

And making a difference is what this leadership class focuses on. Just ask senior Brandon Davis who took the class last year.

"It gives you so many life lessons and you learn so much that you use in every day life and you know it's just going to help you," Davis said.

Each week the class focuses on a new leadership quality, learning about a man or woman who exemplified that characteristic. Davis said his favorite is Martin Luther King Jr.

"Cause he is probably the best example of composure you know, back during the Civil Rights movement," Davis explained. "He fought very hard for equal rights for everyone and you know I look up to him you know a great leader for composure."

The class also take field trips to businesses in the community to learn how leadership is displayed in the work force.

"Often times the kids go into an establishment they didn't even recognize was here," Saunders said.

Guest speakers from the area also come to their class.

"These people come in with a new thought process, a new concept, a different way of looking at it, and everybody needs to recognize that diversity wins," she added.

For Saunders, it's the way students change over the course of the class that makes the biggest difference.

"To see kids grow from day one to the end of the semester, to watch their confidence grow, their self-esteem grow and their character grow so that they can take that throughout life, has just been so rewarding," she smiled.