"I'll remember this for the rest of my life;" Navy diver reunites with pilot he rescued 60 years ago 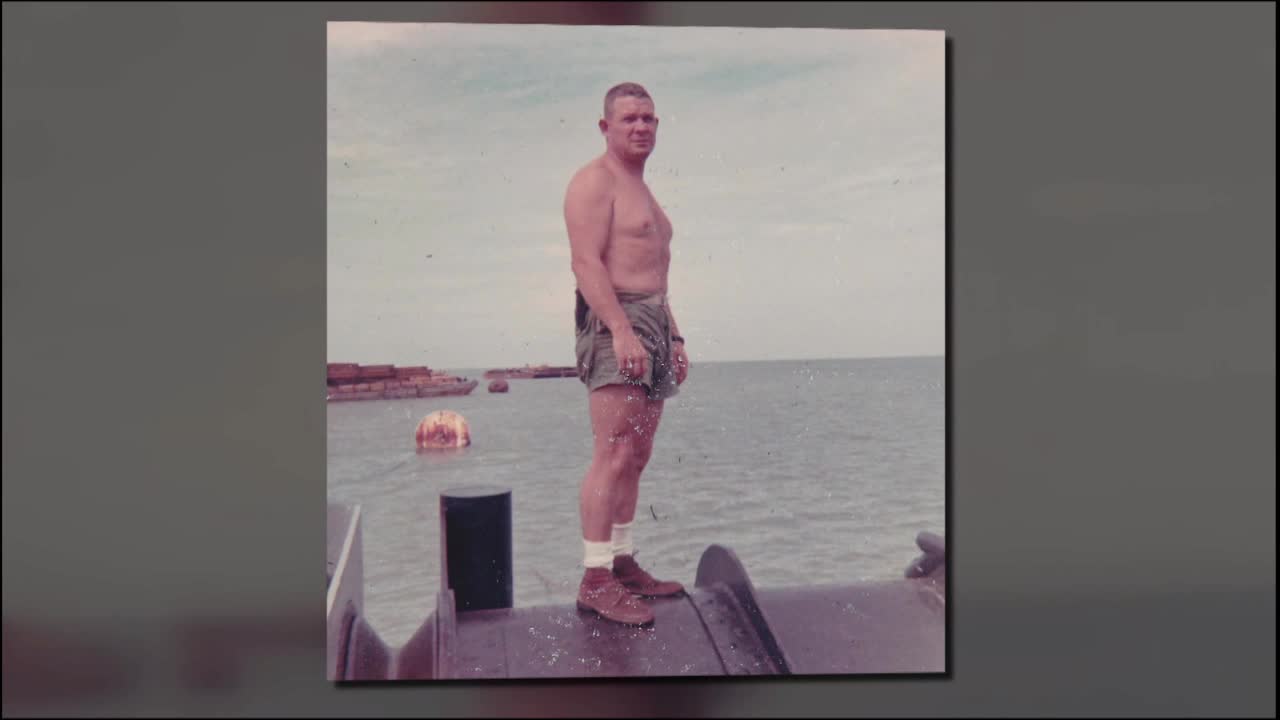 ROANOKE, Va. (WDBJ7) - They say that our encounters with others tend to be like ships passing in the night. Lt. John Hebbe thanks his lucky stars they tend to do that.

“How do you do. My name is John Hebbe. H-e-b-b-e, rhymes with Debbie which is what I tell all the kids in school!"

Hebbe is a decorated veteran of the Navy, Army and the Air Force. He was born at the start of the Great Depression and enlisted in the Navy right after completing high school in upstate New York, at the beginning of the Korean War.

Hebbe is now an energetic substitute teacher in Fairfax, full of stories.

"Oh by the way, you ready?" he asks, after completing one story. "One more?"

But perhaps his favorite story is from the night of February 10, 1960, when a stranger saved his life.

"Had he not jumped in," Hebbe recalled, "it would have been a different ending."

At the time, Hebbe was flying his attack planes off of the USS Saratoga, 70 miles off the coast of Sicily. Around 3 a.m. on February 10, Hebbe recalled a pitch black night with choppy water. He was flying a propeller plane. He got the go ahead to begin his launch off of the carrier. That's when things took a turn. In the pitch black, Hebbe didn't realize, until it was too late, that his left wing had snagged on other planes.

He tried his best to right the plane, but it was too late.

“And I hit the water, the airplane is sinking, it was never made to land in water, eventually I got out.”

Hebbe said his Mae West, the flotation vests named for a buxom blonde movie star, didn't really inflate. He made it into a dingy and lit his flare in the darkness. The flame then ignited the hundreds of gallons of fuel sitting on top of the water. His raft melted and soon he began to struggle as his suit filled with water, dragging him down.

But from on board the USS Benham, Navy rescue diver Marshall Beard was watching.

Beard had joined the Army at just 15 years old, altering his birth certificate to make it in. He was sent to training where he began parachuting before the Army realized his lie and discharged him. He would return to the Navy and stayed there for many years before working at the Virginia Institute of Marine Science, the Virginia Marine Police Department and as a commercial fisherman. Decorated himself, Beard is the recipient of a Bronze Star for his efforts in Vietnam.

The night Hebbe's plane smashed into th Mediterranean, Chief Petty Officer Beard was running guard for carriers aboard the Behnham.

“I remember being woken up at 3 o'clock in the morning, someone saying, 'The pilot’s in the water!' And everybody hit the deck and when I came on deck all I seen was a big fire," said Beard.

Dressed in nothing but a t-shirt and shorts, Beard jumped.

“When the searchlights were on him, I saw that he was exhausted and about to go under and so that’s when I went overboard and I got a line to him," he said.

Beard wrapped a line around Hebbe who was quickly pulled on board after nearly 15 mins in the flaming water.

Someone alerted the captain who got the destroyer underway. Unbeknownst to him, Beard still being towed in the water behind.

“One of the guys hollered up, 'Beard’s still in the water!' Beard recalled.

The rough surf had taken off his bottoms and barnacles alongside the ship had scraped his legs. He made it on deck, he will tell you, in his birthday suit.

Meanwhile, Hebbe said he was looking for the glass of brandy he knew he'd be guaranteed post-rescue. Beard headed for a shower, near hypothermia from his rescue.

“Both the pilot and I had a guardian angel with us that night," Beard said. "Because I believe we wouldn’t have made it if we didn’t.”

What Beard also had was three gallons of ice cream, sent from the USS Saratoga as a thank you gift for the rescue. What they also sent over was a flight jacket, fur lined collar, with a patch from Hebbe's VA-35 Norfolk based attack squadron, the Black Panthers. Beard sent a thank you letter to Hebbe and his squadron. It never made it to Hebbe.

The next morning, Hebbe was picked up on a helicopter and sent back to the Saratoga. He never saw his rescuer again. He didn't even know his name. But he thought of him often and has told his rescue story many times.

He even attended reunions of the USS Benham, hoping to meet his rescuer again.

"I asked, "Now which one of you was the one that saved me?'" Hebbe said. "He was never there."

But no one in Marshall Beard's family had heard the story, until just a few weeks ago.

“It’s like finding out that your dad’s superman. You know?" said Lisa Beard, his daughter. "He’s a real hero. And so that’s pretty cool."

Beard has been helping her father downsize. Her mother passed away in 2016 after battling Alzheimer's Disease. Her dad is moving to the Richmond area to live with her.

And so while Beard was helping her dad pack up, he pulled out the Black Panther patch, all that was now left of the well worn flight jacket. He told her he wanted her to have it. She told him she wanted to hear the story.

“Daddy said the only thing that they ever shared was a look and he could see the panic and the fear on his face," she said. "But they never said a word to each other.”

Beard said while she was surprised to hear of the amazing overnight rescue, she was not surprised her father had never told her of it.

All Beard remembered from the rescue operation was the name Hebbe. So his daughter started tracking him down. Within 24 hours, she had a phone number.

“When I called I got an answering machine," Marshall Beard said of his telephone call in September. "And I says, 'Is this the Lt. Hebbe that I took a midnight swim with in the Mediterranean?' And he must have had an answering machine, he could hear the voice he picked it up and he said, 'Say that again?!'”

“Few!" said Hebbe in his retelling of the phone call. "'This is John Hebbe, this is the guy you jumped in and saved!'"

For Hebbe, the few hours distance between them was nothing on a lifetime of memories. So for the first time in 60 years, the pilot and the diver met again under far better circumstances.

"Oh I think this is him," said Carol Hebbe, his wife, pointing ahead.

"Oh it is!" said Hebbe, looking toward the front of Mac and Bob's Restaurant in Salem, where an older man wearing a veterans hat with pins had just appeared.

"It's about time you got here!" Hebbe said enthusiastically!

Beard, a disciplined man, looks at his watch.

"It's been 60 years!" exclaimed Hebbe, as a smile broke out on Beard's face.

They hug. Hebbe is laughing and crying. He pats Beard on the back.

Beard looks up at the tall man, still sporting a crew cut, as reporters, waitresses, Lisa and Carol all gather 'round.

"You look better than the last time I seen you!" said Beard.

After more hugs, pictures, and introductions, Hebbe retrieves a cardboard box. He helps his friend unwrap it. It's a plaque, with Hebbe's attack squadron symbol on the front, with a message.

For Hebbe, a lunch reunion was a chance to shake the hand of a man on a ship that was just in time.

“It wasn’t just that I wanted to thank him," said Hebbe, emotion in his voice. "It’s that from the bottom of my heart, he’s been the door to the rest of my life.”

And for Beard, it was a chance to be grateful that ships sometimes pass each other once again.

“I’m happy it happened. It’s probably destiny it was supposed to happen," he said. "...I’m gonna remember this day for the rest of my life. As long as I have left.”