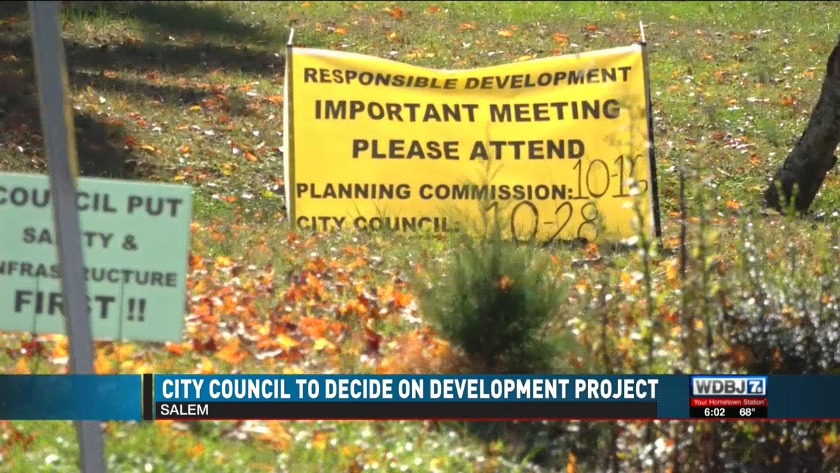 The project, put forward by developer R. Fralin & Associates, would add 139 homes to the largest piece of untouched land in the city. Commonly known as Simms farm, the land is currently more than 60 acres of pasture, set on a rocky hillside.

Speaking after the vote, Mayor Randy Foley argued approving the project was the right thing to do.

"It's in our comprehensive plan that this would become residential single family. And you know, they've checked all the boxes, they've done all they needed to do," he said.

Neighbors mounted a fierce campaign against the project, arguing the new houses would overwhelm roads and sewer lines. Hundreds of people packed every city council and planning commission meeting where the project was discussed.

That opposition prompted city council to put the development on hold in November, giving officials time to asses the concerns and come up with solutions.

Those solutions were presented Monday, and included sewer improvements, a new storm drain, a partial widening of Franklin Road and a new roundabout to handle traffic. Residents jeered at the roundabout, and two men stood up and tried to make statements while council discussed the issue.

The development was also approved with a number of conditions. Those included limiting construction to between 7 a.m. and 5 p.m. Monday through Friday, and not beginning construction before 2021.

EARLIER STORY: The largest undeveloped parcel of property in Salem is set to be discussed at City Council Monday night.

Now, developer R. Fralin Companies wants to add 139 homes to the 67-acre lot. "I spent many Fourth of Julys up here," said nearby resident Jeff Kessel while overlooking the farm property.

Kessel has lived in his neighborhood for 14 years. Like his, many front yards surrounding the proposed property are donned with signs reading: "Responsible Development" and "Council, put safety and infrastructure first!"

Many residents agree the property should be developed, but done so "responsibly." Kessel explained, "We understand that the best use for this piece of property is to make it houses, we just want them to say, 'not right now.'"

He says he hopes the city will agree to make adjustments before allowing more development. "The folks that live up here and have lived up here for 15, 20, some for 40 years understand what this development is going to do to the rest of us."

The public hearing is Monday night at 7:30 at the Salem Civic Center.