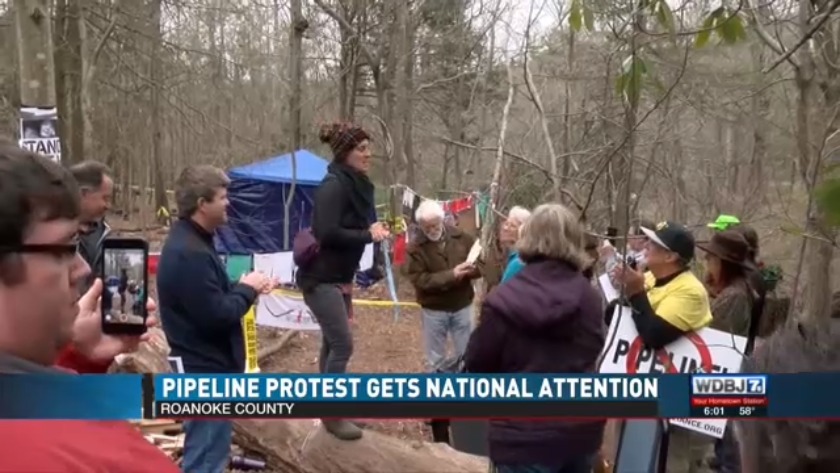 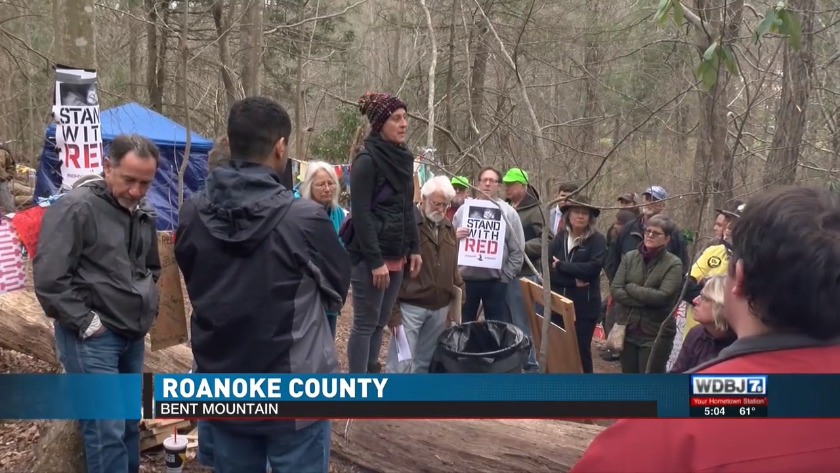 ROANOKE CO., Va. (WDBJ7) Monday morning brought a round of applause for the Roanoke County Police, after officers provided meals to Red and Minor Terry over the weekend.

But if opponents of the Mountain Valley Pipeline were encouraged by the turn of events on Bent Mountain, they were also very concerned about developments In Giles County.

Three pipeline protestors were arrested there on Sunday, when they attempted to resupply the tree sitter who is blocking a U.S. Forest Service Road.

"So we have to all stay connected, we all have to stay strong," Beth Deel told the crowd, "and we need to focus on this monopod right now, because the situation is dire."

Doug Chancey is one of the three people who were arrested after they tried to deliver food to the protestor there.

"The only way that she has been able to get water in the last two weeks is by making a gutter and catching rainwater," Chancey told WDBJ7. "They have not allowed any food to come to the pod in over two weeks now."

The visitors who gathered beneath Red Terry's tree stand Monday morning included candidates for congress, a state lawmaker and other pipeline opponents from Tidewater and Northern Virginia.

Less than a week after a group of Virginia lawmakers called on the state to conduct a stream-by-stream analysis of the pipeline project, opponents said they are encouraged by the national attention their concerns are receiving.

"Clearly, over the last week, we've had so much momentum building and people are realizing that the state needs to do more to protect our water," Delegate Sam Rasoul said in an interview, "and that's our right under the Clean Water Act."

The protests are also receiving national attention from news organizations such as the Washington Post, and in social media posts from celebrities including Jamie Lee Curtis and Dave Matthews.

A spokesperson for the Mountain Valley Pipeline released the following statement Monday afternoon:

"We recognize there may be individuals who will always oppose the safe construction of Mountain Valley Pipeline, regardless of the significant effort made by public officials and regulatory agencies to review the project, and the hundreds of route adjustments and modifications made during the past three years to address concerns of landowners and community members."

"We respect opponents' right to peacefully and lawfully protest. At the same time, however, it is important to note that all work for the MVP project has been authorized by federal and state agencies, and the Virginia DEQ has imposed on MVP the most stringent oversight of a natural gas pipeline project in the department's history."

"Our top priority remains the safety of our workers, contractors, law enforcement officers, and people in communities along the route. We are committed to the responsible construction of this important infrastructure project so that we can meet the energy demands across the region."

A late-week soaking could lead to more flooding