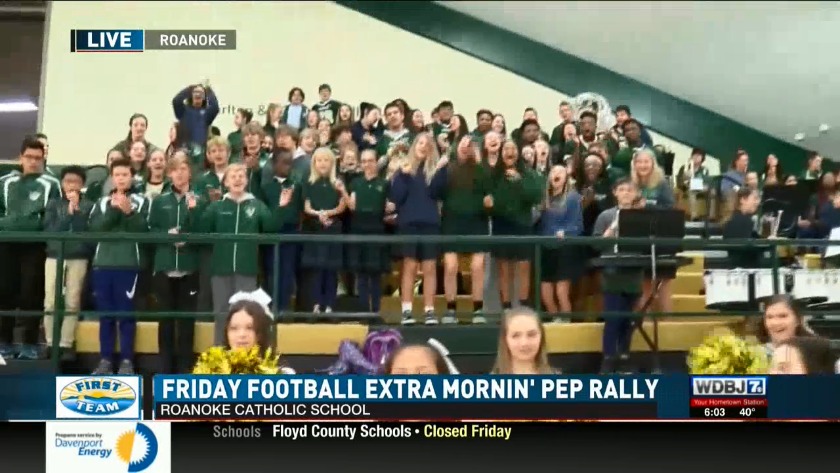 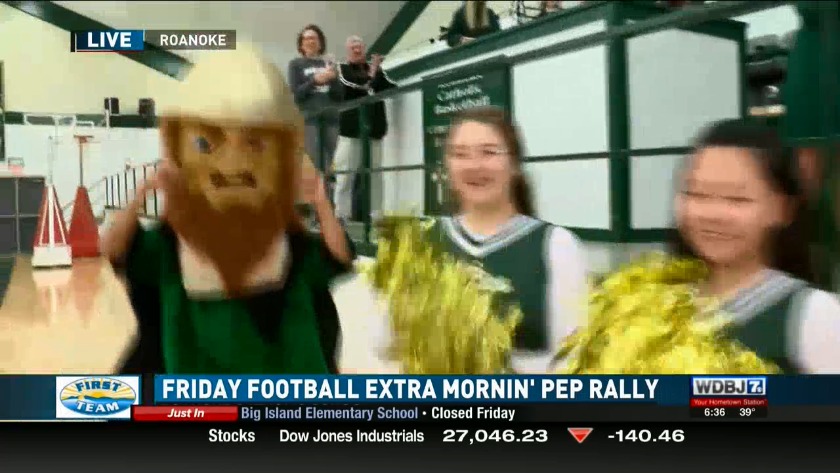 ROANOKE, Va. (WDBJ7) - The first set of students walked through the gymnasium doors at 4:50 a.m.! By 5:15 a.m. their fellow cheerleaders had joined them. By 5:30 a.m. the band had arrived and was warming up. By 5:45 a.m. the bleachers were packed with students, many of them munching on the donuts they'd been bribed with to come to school early. And at 5:55 a.m. the final FFE Mornin' Pep Rally of the season had officially kicked off at Roanoke Catholic School.

We were told that RCS is always coming up with new ways to engage their students and many of their clubs are actually ideas that the students came up with themselves. The first one we were introduced to is the Entomology Club.

While most people probably don't like creepy, crawly things, Xavier Bean is not one of them.

"Well like ever since I was a little kid I kind of liked the forest and stuff," Bean said. "I was always outside. And I oftentimes was around insects and a lot of people were afraid of them so it was kind of cool that I wasn't."

Fast forward to his junior year in high school, he founded the Entomology Club to foster other student's interest in bugs as well.

"One thing being that most of them are pests," he explained. "There's actually a very small percent that are pests. The other ones are either the ones that just chill or are the ones that eat the pests."

Over in the next classroom, the Medico Club meets after school.

"It's basically a club for students going into the medical field," Chisom Ezigbo said.

It was started this year by Ezigbo and her sister Mmatchi who both want to be doctors one day.

"It will teach them," Mmatchi Ezigbo said about the club. "It will broaden their horizons so they can be better prepared for what's to come in college and further on."

They recently took a trip to the Fralin Biomedical Institute at Carilion.

"We went to a lab and we saw people doing research," Chisom Ezigbo said. "We saw some cool machines and stuff like that."

"I was really inspired," Mmatchi added. "I thought, 'Wow. This is what they're doing behind what don't see.'"

And while these clubs intentionally prepare students for college and careers, there's another club that's all about creating a positive environment while the students are still in high school.

"Squad is a club at our school. It's more of a spirit club," Emily Hemphill said as she stood among her friends, Emily Wilson-Leedy and Isabella Alvarez. "And it's where we're going out and we're mainly supporting our girls athletics that are sometimes overlooked."

One of the Squad members, Alvarez, is also on the volleyball team.

"Having my classmates supporting me at the game, it has changed the tide of many games," she said. "I think it helps all of us, me and my teammates, be more motivated and want to win more."

Over the years, as the club grows, they hope to get more fans in the stand for all girls' sports.

"I hope we can make it a normal thing," Alvarez said. "Have a bunch of people attending the girls basketball, volleyball games, maybe the cross country [races]. Just get more attendance and recognition for girls' sports."

Among these new clubs, there's also a new broadcast-journalism class in which students can earn college credit. Earlier this week WDBJ7 got a behind-the-scenes look at the taping of their morning announcement show, Celtics Live.

Besides producing morning announcements, each student also writes a weekly article for the school's online newspaper, The Celtic Storm.

"We can upload different stories written about stuff that's happening about the school. Tell outsiders and alumni what's going on in the school," Paxton Ayers said.

For it's inaugural year, the class has brought a unique group of students together.

"We're kind of like the Goonies," Anne Notebaert laughed. "We all come from different backgrounds, but we all come together to do this one project everyday."

Some come to the class with all the public speaking confidence in the world.

Others are more nervous.

"I personally don't like speaking in front of people so this helps me with my public speaking as well," Lopez said,

"I'm somewhat of a shy person so it's kind of hard for me to go out and ask people about what they felt about an event," Notebaert added.

But this class is all about getting students to step outside of their comfort zones.

"So it kind of gave me that little bit of confidence like, 'I have to do this so I might as well do it confidently,'" Notebaert said.

They're also learning perseverance and to be okay with the growing process.

"When we first started this we were awful, everyone had no energy," Kawuan Ray added. "Everyone was like 'uh...uh...uh...'"

Over the past few months of the class, they've improved in many areas and through every up and down, had fun together.

"You wouldn't think that it's as fun as it is, but it is really fun," Porter said. "Being in front of people, reading a script, making a script, you know typing up a script... And then after that you know, when it gets published everyone's seeing it, everyone's laughing and joking with people over the art that you did. So I think that if you want to join this class, I say go for it."

And that wraps up season three of WDBJ7's FFE Mornin' Pep Rally. If you missed any of the shows, don't worry! Friday, November 8, WDBJ7 Mornin' will be recapping the season in a special pep rally highlights segment.

Warm and unsettled the next few days